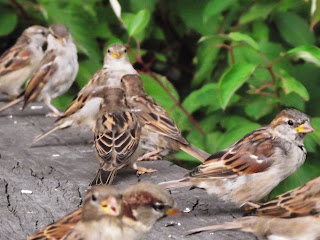 (Picture Left: Days Gone By? Sparrows who used to be at Turtle Pond. Can't find any now)
Yesterday, I opened up a Twitter page in defense of Canada geese. Will be posting relevant articles and updates regularly to this site. Considering the current war on geese, we who care about these magnificent birds have our work cut out for us. We have to utilize whatever resources or Internet avenues available to us.
Patty Adjamine (LoveThemGeese) on Twitter
This is, of course in addition to our Facebook page on the geese which after three months continues to slowly gain new members and seemingly thrive.
Facebook For the love of the geese in Prospect Park
I have not, of course been writing so regularly in this journal. That is due to the time invested in researching articles and information on geese and posting to the various sites. I also have Flickr and Youtube accounts and regularly post photos and videos to those sites. All of these activities eat up time.
But, what takes up the most time is investing hours in observing what is truly happening in our parks with respect to not only Canada geese, but the other animals and birds as well.
And that is actually the reason for writing in the blog today:
Our city parks regularly do sprayings of insecticides and pesticides on grasses. Usually, areas like the Great Lawn or North Meadow in Central Park will be temporarily closed off and red flags will be posted.
In the past, I have kept observation on how these sprayings affected bird populations in Central Park. While I am by no means "expert" on this, it at least seemed that the sparrow and robin populations (the two most plentiful species of birds) were not adversely impacted.
But, that does not seem the case now.
A few weeks ago, the familiar red flags were posted at the North Meadow over a couple of days. The smell of pesticides lingered in the air.
About a week later, the chemical smell was replaced by a putrid stink.
Like the smell of dead bodies.
The odor was so bad that one felt compelled to take shallow breaths when passing through the North Meadow and move as quickly as possible away from it.
I attributed the bad smell to the fact that major restoration efforts are taking place near the North Meadow. Lots of grounds being dug up and trees uprooted. Perhaps in the excavation of old grounds, some areas of decay are dug up? I didn't know. Again, I am no expert in these matters.
But, what has become downright alarming is the seeming and sudden disappearance of thousands of robins, sparrows and other birds that regularly made the North Meadow and other parts of the park their home!
The "disappearances" are not just at the North Meadow.
A few days ago, I walked in the early morning (times when most birds are very active) with my dogs from Turtle Pond ( 79'th St) to Harlem Meer (110th St). I walked from East Side to West Side and back again.
I don't think I counted even five sparrows or robins along the entire route. There are normally hundreds of sparrows in and around Turtle Pond alone.
What could be the explanation for these sudden and mysterious disappearances?
Sparrows are not migratory birds. They are extremely sturdy little creatures that one even sees flying and chirping about in bitter snow storms.
Robins too, are birds that frequent our parks throughout the four seasons. In recent years, robin populations have ballooned in our parks.
Nor, did I see any pigeons!
Though not as populous as sparrows and robins in our parks, one always see small flocks of pigeons nibbling along the grasses near the Great Lawn.
I have seen no pigeons in the park over the past week or so.
The dead silence in the park in recent days is deafening.
I am wondering why no one else seems to be questioning this?
I of course, asked several park workers what happened to the birds.
"They're here," they say as if not noticing (or rather, not wanting me to notice) the silence and absence of anything flying around.
Regarding why other people don't seem to be noticing or questioning, perhaps that is not surprising.
Most users of the park these days are either running or cycling. (Everyone seemingly on fanatical exercise kicks.) I guess one is unlikely to notice much when zooming through the park paths and roads and aiming just to get a certain number of miles in.
Least of all the presence -- or absence of wildlife and birds.
Come to think of it, I don't recall seeing any squirrels recently either in Central Park.
Most of the Canada geese at Harlem Meer have also seemingly fled or migrated to somewhere else. -- Including the goose with fishing line tightly embedded around the leg.
Another "fishing line" goose remains at the Meer, along with his family. But, the park rangers seem inept or not terribly enthused about rescuing the remaining Canada goose with fishing line. One park ranger warned me yesterday, "If we get him, he will probably have to be euthanized. The geese can't survive with one leg."
"Why can't we just remove the fishing line?" I asked. "Wouldn't he be OK then?"
I didn't get much of an answer. Then again, the ranger didn't seem terribly knowledgeable about Canada geese to begin with. He told me that the geese are "aggressive and sometimes kill ducklings."
One has to wonder then why mama ducks will choose to sleep near Canada geese at night with their babies -- something I personally witnessed at Turtle Pond many nights over the spring and early summer.
Right now, everything seems kind of numb. Like purple haze of the old Jimmy Hendrix song.
But, most of all, there is that deafening quiet in the park.
Silent Autumn come to town? -- PCA