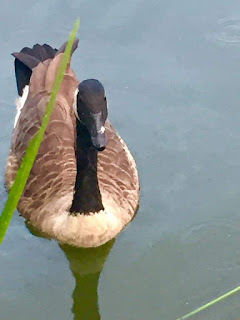 One of the Miracle Seven now at Harlem Meer. (Laura Taylor)

It may seem overly dramatic to refer to seven juvenile geese as, "The Miracle Seven," but it isn't.

For one matter, it is a small miracle that the goslings hatched at all at the Jackie Onassis Reservoir in Central Park.  New York City is in contract with USDA Wildlife Services for Canada goose egg destruction throughout all five boroughs.

Two other nests with goose eggs were destroyed in Central Park this past spring.  The only reason the eggs at the Reservoir were unharmed was because agents from WS were "not able to gain access" to the Reservoir rocks in order destroy the eggs there. -- This from a USDA WS report. (DEP staff must have been out to lunch the day WS showed up to egg-kill.)

Of the ten goslings who ultimately hatched at the Reservoir in May, three perished within the first few weeks. The deaths were likely due to malnutrition as vegetation is routinely destroyed along the Reservoir rocks, leaving scant foliage and grass for wildlife to eat there.

Then, in July, with goslings barely two-months-old, the vegetation was again demolished, leaving nothing but a patch of Poison Ivy -- something inedible for growing goslings and molting geese, unable to fly.

The goslings were doomed and their adult, flightless parents were also in danger of starvation.

Park Rangers and the Central Park Conservancy consistently lied to concerned citizens calling about the deplorable cruelty, claiming that frail, flightless goslings were able to "go over fences" to eat grass on the outside of the Reservoir wall. The severely undersized and skinny goslings were barely able to navigate the rocks, let alone fly over walls and fences at only 7-weeks of age!

Fortunately, those familiar with gosling capabilities (as well as the long history of lies from the Central Park Conservancy and some Park Rangers) didn't buy into the outrageous fabrication and formed teams of organized and reliable feeders to ensure the seven remaining goslings did not starve to death -- as 8 of 9 did the previous summer.

With some people feeding twice a day and naturalist, Laura Taylor regularly feeding and documenting with photos and videos, the frail, under-sized goslings suddenly began to grow and thrive.

It took nearly a month, but they finally filled out, developed flight feathers and began to look normal for their age.

We are happy to finally report that all three families were able to fly out from the Reservoir over the past two weeks (on schedule!) and are currently feeding and expanding flight lessons for goslings at Harlem Meer in Central Park!

It appears that some mallards have joined the geese at the Meer -- something nice to see considering how water bird-empty the Meer has been for the past several months (and most Central Park lakes and ponds still are).

But before we break out any champagne bottles, let us consider the cruel actions of all New York City parks towards struggling wildlife and particularly against Canada geese.  Deliberate starvation campaigns are especially despicable and unpardonable.

Already Central Park Conservancy has put up new "No Feeding" signs near the site geese and ducks are currently staying at the Meer and it's almost a given that they will soon send out dogs and drones to "harass" the few dozen water birds from the lake.

No action is too low for them.  One park goer has even reported the Conservancy spraying and killing a hive of bees at the Ramble this past week.

The war on wildlife is in full swing at all NYC parks.

That is precisely why it is no exaggeration or dramatics to refer to the surviving Central Park goslings as the "Miracle Seven."

They survived the impossible odds of New York City's perpetual war on them (but not without the heroic efforts of people like Laura Taylor and others).

Indeed, the seven goslings are likely the ONLY goslings to hatch and survive in all of New York City this summer.

That is not something to celebrate as much as mourn.

Sent from Samsung tablet
Posted by PCA at 6:17 AM 2 comments: