"And Then There Were None" 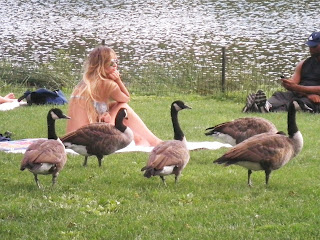 (Photo:  "Memories"  -- Some of the 50 or so geese at Harlem Meer, this time last summer.  Fast forward to now, there are currently NO geese at the Meer.  One has to sadly presume that most or all of the social and gregarious geese in this photo are now dead.)
I returned to Harlem Meer last night.
And unlike the photo posted here (taken last year at this time), there were still no geese at all and indeed, not a whole lot of ducks either.
The park itself appeared to be unscathed by Hurricane Irene. All the trees were standing and everything appeared to be "normal."
"Normal" that is, if one doesn't have photos from the past for this time of year.
This morning, I inserted an old memory card in my computer and looked through a bunch of photos going back as far as the winter of 2009-2010.
There is no question that there were many more geese in Central Park during that time frame than there were this past winter.
But, even more alarming is the comparison of goose numbers in the park during the spring of 2010 and the spring of this year, as well as particularly late summer numbers.
Last year at this time there were at least 50 to 60 geese at Harlem Meer (down about 30 or 40 from the year before).
This year there are zero.
One has to conclude that either the NYC goose population has been severely decimated due to the USDA goose roundups and killings over the past few years or that Central Park has recently employed goose harassment even when goose numbers are at their lowest level in years and certainly would not warrant any kind of harassment.
So far, I have not been able to ascertain from anyone at Central Park Conservancy whether goose harassment has been used in recent weeks, but it would not make sense if it was.
I personally believe the more likely explanation for the absence of geese in CP is that the general population has been severely depleted and there are simply no geese to fly into Central Park as has been the case in the past.
Of course, it could be argued that the geese are simply hanging out in other areas of the city.
But,  this is where it becomes very difficult to know what is happening exactly.
We presently don't seem to have a way to know how many "resident" geese are in other parts of the city.
That is, unless we find a way to motivate other geese or bird lovers from around the city to observe and report numbers to us.
Currently, people are monitoring and reporting goose numbers from Prospect Park and Inwood Park, both of which still have small populations of geese.
But, the current population of geese at Prospect Park is down at least 50% from what it was the same time last year.
Moreover, one needs to consider that the entire population of resident geese at Prospect Park was wiped out in the summer of 2010.  Six weeks later, 107 new geese flew into the park.
But, this year, apparently few or no new geese have flown in to Prospect Park. The roughly 40 geese at PP now is similar to the same number that molted there over the summer.
Geese are flock birds.  The key to their survival is to be able to "gather" in large numbers prior to winter and spring migrations.
We have to keep in mind that geese are a heavily hunted species.  Especially now, as expanded and "early hunting seasons" are occurring all over on the geese -- especially in the north eastern states.
Unless migrating in huge numbers, the likelihood is that small gaggles of flying geese in the fall will be entirely taken out by hunters.
For those New Yorkers still enjoying some geese in their local parks, what I write here is probably sounding very "alarmist."
But, I was one of those New Yorkers last year.
Sure, I had become aware of the USDA roundups around the city and I was obviously very unhappy about them.
But, as long as I knew the roundups and killings had not occurred in Central Park and as long as I was still seeing a decent number of geese arriving and staying at Central Park for various periods of time, I was reasonably confident that they were "safe."
But, I now realize I was wrong in the conjecture.
Today, when looking at the geese who "used to be" in Central Park at this time of year, I am forced to conclude that either all or most of the geese in the photos are now dead.
Were that not the case, they would be at Harlem Meer right now.
So, for those who still have some geese in their local parks now, it is critical to both, observe, count, record and share numbers.  (Nothing can be taken for granted.)
In less than a week's time, I will post a web and email address to report the numbers to.
We will need to be able to accurately document "resident" goose numbers still in our city particularly during early fall (before migratory birds fly in) and early spring (when migratory geese have left) or whatever resident geese still remain will be subject to roundup and slaughter next summer.
Unless we are able to record, document and challenge numbers, then those still seeing geese now in their local parks will be experiencing next year, what I am seeing and recording now:
"And then there were none."
We will only have old photos to look back upon and wonder why we did not become more proactive for the geese a lot sooner?
"And then there were none" can be, like extinction, forever.  -- PCA
*********
Posted by PCA at 4:00 PM

For the love of the geese said...

Update: 75-80 geese at Prospect Park and vicinity. Numbers are definately up.

I will include this in my next letter. Thank you.

Thanks for the update on the Prospect Park goose count.

It is encouraging that new geese have flown into Prospect Park in recent days.

However, since 35 - 40 geese were already there, the new geese coming in are less than half of what arrived last year at this time.

Too soon to draw conclusions (especially without counts from other areas of the city), but I think we still need to be concerned snd monitor.

Unfortunately, I have no geese to count or monitor in Central Park right now and to me that is a red flag.

But, we need to know what is happening elsewhere.

Thanks again for the update.