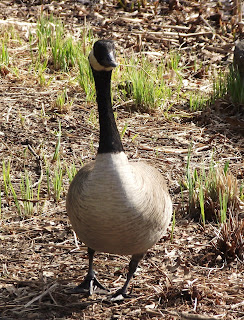 A numbers game.
That is what I have been thinking about over the past few days, as the numbers of Canada geese at Central Park appear to be dwindling at a time they normally surge -- particularly at Harlem Meer.
As previously written, Harlem Meer for the past several years has been a "staging point" for the geese.
Usually, in August (following the molt and/or raising young) large numbers of the geese arrive to the Meer, meet up with former flock or extended family members and stay until the time for fall migrations.
A couple of weeks ago, a new gaggle of geese arrived to the Meer and it seemed for the moment, that matters were once again on their normal course.
There were 15 geese at the Meer last week.
But, earlier this week, that number suddenly dwindled to 5 geese.
And then, Wednesday night, only 2 geese on the entire lake!
As geese are normally "creatures of habit," this sudden taking off from an otherwise gathering location seemed odd.
Were the geese simply off on evening flying jaunts?
That too, is a bit unusual because geese don't normally fly a whole lot with the exceptions of the spring and fall migrations and occasional park hoppings.
Nevertheless, not to panic.
Last night, I waked with my dogs around the Reservoir, Turtle Pond and the entire Boat Lake.  Maybe the Harlem Meer geese had decided to visit these other areas?
But, the only geese seen last night at any of the locations was the family of four geese still at the Reservoir.
Even the ten geese (former Turtle Pond family and friends) at the Boat Lake through the summer molt are gone.
Now granted, I haven't been at every watercourse in Central Park.
And granted, it is possible that in the next few weeks a flood of new geese will suddenly descend on Harlem Meer or other areas in the park.
But, somehow I doubt that now.
The very low goose numbers on the main watercourses in Central Park right now are concerning to me.
It is not "normal" from what I remember or even recorded in this blog from last year.
One might guess that perhaps Central Park has already implemented its "Geese Relief" program to chase geese?   But, I doubt that, too.
With so few geese in the park that would seem a waste of resources at a time no agency can afford to throw money away.
Moreover, the ducks are still at Harlem Meer and they usually leave any time the geese are harassed.
I am suspecting that all the USDA goose cullings over the past 8 years have indeed had "effect" -- far more than the government agency is admitting to.
There are not many geese flying into Central Park now for the simple reason most NYC "resident geese" have been wiped out, particularly over the last three years.
That is a grim speculation and admittedly, it is still conjecture.
But, unless something radically changes over the next three weeks, it will be a grim reality.
One of the things that is absolutely necessary over the next 12 months is to be able to accurately assess current resident goose numbers all over the city and Long Island.
If goose numbers are really as low as they are appearing now in Central Park, that number is too low for the goose population to remain sustainable and viable.
A low gene pool will ultimately result in geese breeding with siblings or other blood relatives and producing deformed young.
Part of me wonders if that's what really happened to the goose family at the Reservoir?
Of the original five goslings, only two survived. The others seemingly "failed to thrive."
Apparently, the other goose family at the south pond in Central Park also suffered losses of at least two of their young.
And then something happened to the eggs that Mama and Papa goose from Turtle Pond attempted to hatch this spring.
(There were also gosling losses at Prospect Park this year. But, suspicion was that earlier oiling of the eggs rendered the "treated" hatchlings vulnerable to mishap.)
None of this is looking good right now.
Geese normally have high survival rates of their young -- partly because the parent geese are so protective of offspring and partly because geese have few natural predators in our city parks.
Are goose numbers so low now in NYC that what should be, a "variable gene pool" has negatively been impacted?
That is a question that for the moment is hanging in the air.
But, it is one that will need to find answer in the coming months if future generations will be able to enjoy the beauty of geese peacefully gliding on a park pond or lake as we have been blessed with.   -- PCA
*********
Posted by PCA at 9:35 AM