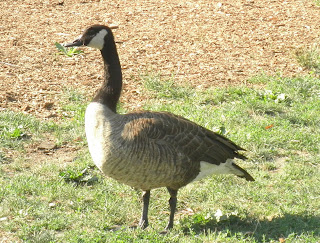 Over the past year of struggle to save the geese, nothing has quite said to me the cause is "hopeless" as much as the lack of comment and public response to the excellent and ground breaking article posted here the other day by Mary Lou Simms.
(Taxpayers subsidizing wild life extermination program, probe shows - KansasCit)
As of this point, there are only 8 comments to the piece, two of which are from me and one of which defames the geese.
One can easily imagine the editors of the papers that published the article saying to themselves, "Wow, that was a waste of valuable newspaper space, judging by the lack of reader response.  We have to be sure never to touch this issue again!  Its editorial suicide!"
I have seen two-paragraph articles with the depth of a pane of glass generate ten times the number of comments that this well researched and documented article did.
If investigative journalism is dead it is apparently because there is little or no public "taste" for it.
Perhaps I am especially sensitive to this issue because of writing an online journal on the same subject.
I write this blog as a kind of "record" to myself, more than anything else.
If, for example, I am somewhat alarmed about the low number of geese in Central Park right now, its because I am able to look back on this journal and compare to numbers recorded from the park the same time last year.
And so yes, it is primarily a way to keep record of counts, observations and occurrences.
But, if I am totally honest, I have to also admit to looking at the number of "page views" everyday.
While not exactly a rousing success in terms of readership, there are apparently a few people who tune into this site fairly regularly.
For a blog that is focused not only on animals, but a specific animal that apparently many people hate, perhaps I should consider myself lucky that this blog generally gets about 30 hits a day.
But, it rarely, if ever inspires comment.
(Perhaps it is just being "hit" by spammers?)
There are times I question why I am writing this journal.
Never more than this evening after noting the poor comment response to the published and masterful article by Mary Lou Simms.
Earlier this evening, I considered starting a new blog.
Perhaps some pop culture or candy news of the day sort of thing.
One that would "keep up with the Kardashions," be up on all the dramas of "The Jersey Shore" or "Housewives" series or the latest winners on "The Bachelor" or "Dancing with the Stars."
I could write about all sorts of exciting things like the latest diets, designer shoes and plastic surgeries.
On those days I was feeling particularly pissy about something (which is quite often), I could write a special "Gripes and Grumbles" entry railing against the particular pet peeve of the day.
"Man, these goons texting on cell phones while walking down the street are tripping over my dogs!"   "My neighbors don't know enough to allow someone to walk down the stairs before they start walking up!"  "I held the door open for the pregnant lady and she didn't even say, 'Thank you!"
Or, more exciting stuff:
"It rained today, so I finally cleaned my stove and the top of my refrigerator after six months!"
And then of course there could be the more serious entries:
"According to the latest study, I should be dead by next week.  I watch too much TV, eat too much butter and sugar and am single."
(Actually, according to the "latest studies," I should have been dead 30 years ago, but whose counting?)
Yes, all kinds of exciting things to write about.
So, why am I writing about geese everyday?
Especially, when someone who writes a thousand times better than I do on this subject, fails to generate even a dozen comments on major newspaper sites?
I don't know.  Those are probably important questions to ponder and figure out.
But, for the moment, I can't claim to feeling a whole lot of drive or passion to write about diets, food, fashion, cosmetic procedures, health, gripes or "The Millionaire Matchmaker."
Perhaps, like Scarlett O'Hara, "I will think about that (stuff) tomorrow."
But, for today, to be more like the song from Martina McBride:
"Do It Anyway."
That is probably the definition of either insanity or greatness of some sort.
At least in the case of Mary Lou Simms, it is the latter.
Its a great piece she wrote.
And I am glad she did it anyway.   -- PCA
*********
Posted by PCA at 7:21 AM