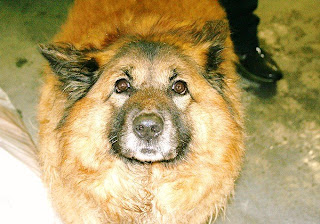 (Picture Left: "Leon" -- a(nother) dog whose "behavior" in the shelter did not reflect actual temperament and wrongly landed him on Euth list.)

On Sunday, I wrote about how we are starting to see the human side of the economic recession all around us.

Last night, I witnessed it again.

While walking one of our boarded dogs, I saw a man with a black, Shepherd mix dog, scrounging through the dumpster outside of "The Vinegar Factory" (an upscale gourmet store on Manhattan's Upper East Side) looking for tossed out rolls and bread.

Repeated scenes like these make one think depression, more than "recession."

But, if we think it only affects people, we need to think again.

Last week, we rescued a dog who wound up in the pound after his former owner was forced to move to "no pets" housing.

It was actually not my plan to rescue "Leon" as we already had too many dogs in boarding and the little pieces of information the shelter provided on Leon were not exactly "selling points."

According to the shelter vets who did the initial exam on Leon, the hefty, 98 lb Chow/Shepherd mix "attempted to bite" and was "difficult to handle."

I was called more than once from the shelter about Leon and requested to rescue him.

"Can you take Leon? He's on the Euth list for tomorrow!" came the desperate plea.

But, I told the New Hope person that unless Leon's past owner could be contacted and provide more helpful information, we could not take the dog.

To make a long story short, I was finally given the number of Leon's former owner by a staffer of the shelter who shall remain nameless here for obvious reasons.

I called the former owner myself.

Well, the picture "Ronnie" provided of her former dog was far different than what was showing up in Leon's description on the shelter Euthanasia list.

According to both the grown daughter of the owner and the woman herself, (I was on a 3-way call with both), Leon was a "wonderful, gentle dog....loving with young children, people, and even cats!" Ronnie went on to tell me that she had been forced some months back to move into a smaller, "no pets" apartment. But, rather than give up her beloved dog, she attempted to "hide" Leon. She never took Leon out since moving into the new place (for fear of being seen by the landlord) and since the dog was quiet, she was seemingly able to get away with keeping Leon for many months.

But, eventually the landlord discovered the hidden dog and threatened Ronnie with eviction.

Then, desperate, Ronnie and her daughter tried to find a home for Leon themselves, rather than see the dog wind up in the pound. They even offered money for someone to take the dog.

But, adoptions are more complicated than simply trying to palm an animal off on someone. "Desperate adoptions" are usually failed adoptions -- as this one turned out to be.

The man Ronnie gave her treasured dog to, apparently couldn't take care of Leon or perhaps just didn't really want a dog. He dumped Leon in the pound anyway.

Repeatedly during the conversation, Ronnie and her daughter pleaded with me, "Please don't let Leon die! -- He is a wonderful dog and would be a loving companion to any family who can give him time to know them!"

Ronnie's daughter even told me her Mother "was on the verge of a nervous breakdown" over the loss of her dog.

The whole story reminded me a little of those good people who attempted to "hide" Jews from Nazi's during WW2. -- I had to fight back tears.

Some of course will resent me for saying that as animals aren't people and landlords aren't Nazis.

But, the callousness with which many Landlords these days are forcing people to "get rid of" perfectly loving and well behaved pets and the intense suffering and guilt many people experience, especially when seeing their beloved cats or dogs go to the pound (where they face likely death) are, in some ways similar.

I promised Ronnie and her daughter that I would rescue Leon from the pound and do my best to see to it that he would only go to loving adopters. He would not die in the shelter.

Of course, following the phone conversation, I was still in the same mess in terms of what to do with a 90+ pound dog. Very large dogs can be extremely hard to place regardless of how "loving and gentle" they may be.

I remembered a young woman had called a couple of days before offering foster for a dog who got along well with other dogs. ("Nicole" and her husband already have two dogs in their home in New Jersey.)

I didn't know whether Nicole would be willing to foster 98 lb Leon, but I had nothing to lose by calling and asking.

Much to my surprise and relief, Nicole was willing to meet me at the shelter the following day in order to see Leon and possibly take him home!

There were still a number of things that could go wrong (person changes their mind, some emergency comes up or the people simply don't like the dog) and so I made possible back up arrangements for Leon to go to boarding in such negative or unforeseen event (something I was greatly hoping to avoid).

That evening I called the New Hope number to pull Leon from the next day's death list.

The following day (Friday) I met Nicole at the shelter and together we went to see Leon.

Though not at all "aggressive" Leon was very anxious to get out of his cage and the second I opened it, he sprung out before I could get the slip leash over him.

Leon bounded into the shelter hall way, heading straight for the door. This was one dog who wanted "out" of the shelter and back to his beloved owners and former home.

Unfortunately, "former" is the key word in that sentence.

There was no going back for Leon.

One of the animal handlers helped to corral Leon and I was able to get the leash on him.

Nicole and I then walked the grossly obese (from not having been walked over the course of many months) Chow/Shepherd mix in the yard in back of the shelter. Although extremely overweight, Leon nevertheless had a beautiful, silky coat and it appeared that he received very good care in his former home.

Leon (much like his former owners said) seemed very sweet and gentle, but distracted.

Fortunately, for both him and myself, Nicole was very understanding of the dog's stress and mood state and agreed to take Leon home to foster.

We had to request the help from one of the shelter animal handlers to lift Leon into Nicole's high SUV. Though able to walk swiftly and without any problems, Leon was simply too fat to jump into the back of the SUV without aid.

Yesterday I called Nicole to see how things were going with Leon.

Again, to my surprise, matters have been going extremely well with the chunky Chow mix, the only "problem" being that Leon had a poor appetite the first couple of days.

But, Nicole reported that Leon's appetite seemed normal now and he was getting along well with the couple's other two dogs and behaving very affectionately with Nicole and her husband.

To my amazement, (considering his past circumstances) Leon was even totally housebroken!

Nicole and her husband are presently taking Leon for long walks, 3 or 4 times a day. He loves the walks and hopefully, the consistent exercise will help him to shed some excess weight.

We have already had one potential good adoption call on Leon, but for now to simply be grateful that he is out of the pound and in an excellent foster home.

Even in these very troubled times, there are those small miracles and glimmers of hope to offset the otherwise tragedy of human and animal losses.

Its not an easy road ahead, but thanks to some good and sacrificing people (like Nicole and her husband) there are those rays of sunshine.

One of them shown on Leon -- and me this past week.